This article continues directly from Part 1 in the series "Critical Insights Into the Domain Industry".

Google’s response to the aggregation of traffic by parking companies was to instantly grant a number of additional domain feeds to new parking companies. Some of these feeds had a honeymoon clause that allowed them to have a competitive advantage versus the larger incumbents. Many domain investors flocked to these new companies as they were seen as their salvation to paying renewal fees. This instantly re-fragmented the marketplace.

Now that the market was split up again, Google instituted DRID’s (Domain Registrant ID) to reduce fraud (this was a good move IMHO) and CAF (Custom Ad Frame). CAF is where Google controls everything on the lander for a parked page.

Personally, I think that this overall strategy was a really clever part on Google. It allowed them to decrease PPC rates and completely control the entire domain channel without the threat of a wounded Yahoo stepping up to the plate. Some people get really upset by Google’s behaviour. What domain investors need to understand is that Google is obligated to behave in such a fashion on behalf of their shareholders.

In fact, if you look at the Google TAC (Traffic Acquisition Costs) graph over the last years you can see the TAC in a constant decline as Google buys traffic at cheaper and cheaper rates. The domain channel is but one part of the overall TAC number....sadly, this is not broken out as a separate number. It would appear that the TAC is now at the point where tier 2 players are a serous contender for the traffic. This has really made zero click a feasible option for domain traffic. The challenge for individual domain investors is to actually take advantage of this... 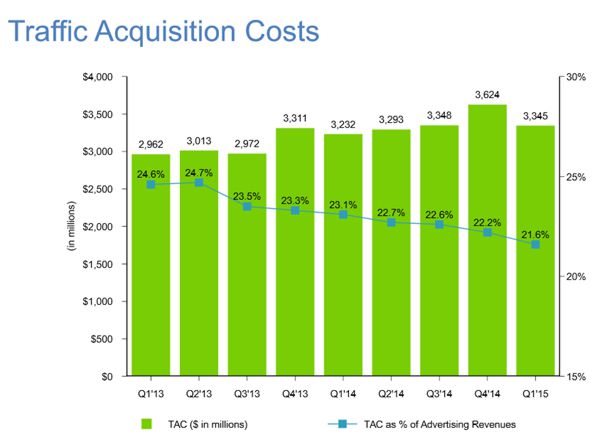 So let’s get back to the story. So who bought the domains being sold by investors and how did they buy them? Many of the buyers of the traffic domains did so with debt or investor backed money raised just before the financial crash. Post the GFC this became problematic as:

A number of funds that raised a lot of money found themselves in the awkward situation of dealing with boards that were screaming for results. Here’s what’s interesting. In the past it was good enough to buy a domain and get phenomenal returns from the traffic but now things were different. A different set of skills were required to extract every bit of value from the domain traffic.

A good way of thinking about the problem is like this. Previously you could bend down and pick up a nugget of gold while now you need to drill three miles deep and run a shaft two miles horizontally to find the seams of gold in the traffic. The gold is still there but it just takes more effort to get it out.

The individuals and companies that raised cash to acquire domains now needed a different set of skills to extract the value. For most companies the individuals have skills to find domains, do deals and do basic monetisation. Very few, to none of them had the skills necessary to extract every dollar out of the traffic.

The problem then became one of ego. For the years before the GFC many of the individuals that had established these domain funds had been lauded as geniuses. They were partying like there was no tomorrow and almost overnight they were completely out of their depth. Picking gold up off the ground is very different from driving shafts into the bedrock.

I remember being in a meeting with one such fund where my company, ParkLogic, had increased the revenue by 32% (versus a direct Google feed). The company refused to admit that this was possible and turned their back on the additional revenue. It turned out that there was massive political infighting and egos were being threatened because they didn’t have the skills to produce the same results. Lesson learned, it’s always easier to deny the facts then to admit you’re wrong.

These same portfolios are now being broken up into pieces as investors (and debtors) endeavour to get some of their money back. Domains that were purchased for 40+ months revenue are now being sold for 12-18 months.

Michael is passionate about working with online entrepreneurs to help them navigate their new ventures around the many pitfalls that all businesses face.