I remember speaking at TRAFFIC Vegas 2008 and I put up the below graph on the projector. I indicated that the industry was in a mini-bubble with domains at hugely inflated prices. I had a large number of people come to me after my session and tell me that I was nuts. Was I wrong? 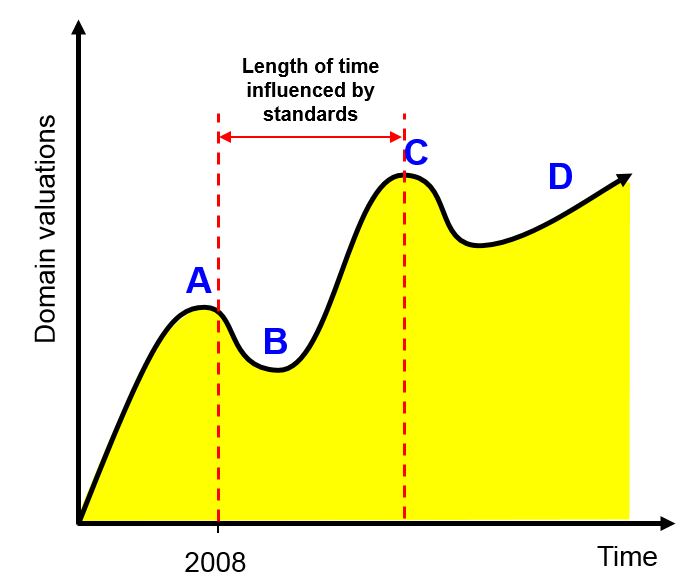 I believed that we were at point A in the chart and the mini-bubble was in full swing. So why did I stand up and pour call water over the partying atmosphere? To understand what I was seeing we need to understand the industry at that time. This is the state of the industry back in 2008:

1.      Market valuation were being underpinned by a few select domainers – no market depth.

4.      Flurry of new small investors hoping they weren’t too late.

Anyone of these factors alone would inflate prices but combined, they created a massive bubble. Domains with little to no value went for crazy prices and traffic domains sold for insane multiples. The euphoria was like a contagion that was eating away at the heart of the industry as it danced to some strange beat. More and more people wanted to join the celebration as if there would be no end.

I’ll never forget seeing a domain magazine enter the market (remember we are niche) and then a second magazine appeared! This is when I personally sold the vast majority of my own domain portfolio….the writing was on the wall. I was out! I took the money, spent 6 months traveling, got my pilot’s license and paid for the kid’s school fees. Life was very good.

Since that time there’s been a lot of blood in the water as domain investors that had raised debt/equity capital discovered they were in a new world - point B. The Global Financial Crisis (GFC) was the icing on the cake and Google, correctly put the squeeze on payouts….don’t forget they have shareholders in a turbulent financial market.

When seeing the GFC storm first hit I read a domain blog suggesting that it was great to be in the domain industry and not be subject to the financial winds. I immediately wrote an article saying that if you believed the writer then you were living in a fool’s paradise.

Let’s think about the GFC and the factors above. Market makers left as they battened down the hatches of their own financial situations, parking revenues declined courtesy of Google, debt financing dried up and new investors vanished. I’ll deal with the final factor in my next article…so let’s hang onto that one.

During this time I know of quite a number of companies that have either had to tell investors that their ROI will now be over a much longer time frame and some even had to liquidate assets to crystalise losses. Many of those individuals that raised debt have found themselves selling their house or have gone into bankruptcy. This is a sorry tale but one that has been a nightmare reality for some.

It has been really difficult for these individuals as they were like shooting stars that shot across the sky in a blaze of glory just to burn up. Most are no longer in the industry, some stole from other domainers, others suffered massive personal problems as the financial pressures came to bear and quite a number ended up with serious health problems due to stress.

I remember calling up one such person to see what I could do to help them out. They sounded like a shadow of their former self. My advice to anyone that has gone through financial hardship is to get help sooner rather than later. For the rest of us that have survived those years….we need to thank God that we’re still here!

One of the things I love doing at conferences is getting together with this group of domainers and discussing what kept their heads in the game during those years and what they're doing now. They typically don't make a big show about what they are doing but nevertheless they are inspirational individuals and are ALL in my "Hall of Fame".