I've spoken and attended a lot of conferences over the years….and clocked up quite a few airline miles in the process! During this time I've seen so many people come and go, businesses launched only to vanish and domain investments completely mismanaged.

So why am I reflecting on these things? I was speaking with a client this morning and the conversation caused me to journey down memory lane and review a few of my old presentations that I’ve shared at conferences.

I had a bit of a laugh when I looked at a presentation that I did at TRAFFIC Vegas 2008. One of the slides predicted the recession and the collapse of domain valuations and PPC revenue. Guess what….it happened.

Am I a living genius? My wife would be the first to say, not at all! What I try and do is take in what is happening in the complete industry and then ask the reason “Why?” This is quickly followed up by, “So what does this mean?”

So let's take a look at the state of the domain industry with these two questions in mind.

Why do many people think that domain parking is dead? Back when the revenue squeeze came on many domainers were left holding two types of domains, traffic and brandable domains. At the time brandable domains weren’t in fashion because there was a global recession. Despite this everyone believed that they knew their domains would be worth a fortune (wink, wink).

Many investors convinced themselves that PPC rates were declining and that soon all of their traffic domains would be worthless. So they sold them off at discount prices to help fund the registrations of the brandable domains.

You see, brandable domains are like a ticket in the lottery. You have to have a ticket if you will have any chance of winning….the only problem is that the domain lottery ticket has to be paid each year. When you don’t have the funds to finance registrations you have no choice but to look at selling the one thing that does have value now……that’s traffic domains.


As PPC rates decreased there was pressure to sell while you still could. Very few people thought about how to increase PPC rates and maintain their revenue lines. A herd mentality developed and traffic domains began flying out the door while at the same time domainers dropped more speculative domains.

I want to say upfront that although PPC rates did decrease they have not decreased as much as many domain investors have experienced. Here’s some data that I think you’ll find interesting. The most that ANY parking company wins is 25% of the traffic. This means that in the absolute best case scenario, if you left all of your domains with one parking provider then 75% of the time the domains can perform better elsewhere!

Some domain investors caught onto this and began manually moving their domains around to find the best monetisation solution.  Here’s another stat that most people aren’t  going to like. After nearly nine years of running what I believe is one of the most sophisticated optimisationsystem in the world I have found that around 33%  of domains move providers every 3 months.The problem is that it’s  a different set of solutions and a different set of domains!

So why did PPC rates decrease? It was really simple, because they could. Google is the dominant provider of PPC revenue to the entire domain channel and to maintain its position in the industry it logically did two things. To fully understand this we need to first understand the industry at the time.

Traffic had begun consolidating around several large hubs of monetisation providers, the largest two of which were Domain Sponsor and Sedo. The problem with a consolidating market is that the tail could end up wagging the “Google dog”.

While traffic was spread throughout the industry Google could play one player off against another. The problem became when Domain Sponsor raised a lot of capital via Oakhill Capital Partners and Sedo became part of United Internet and developed a domain sales revenue stream that was not dependent upon Google. Both these actions meant that the companies could now buy vast amounts of traffic and potentially break the Google exclusivity stranglehold.

The next article will continue the story of the domain industry and how Google responded to this threat. 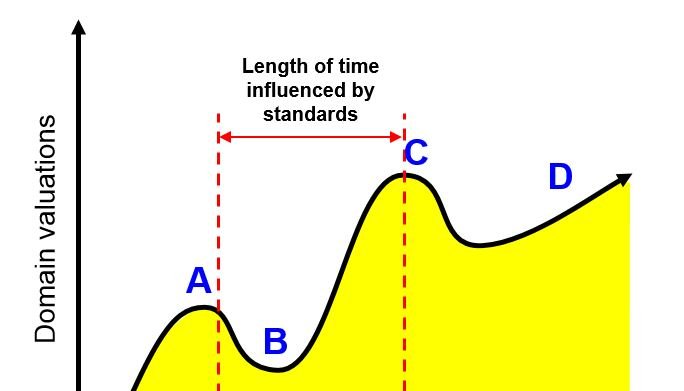